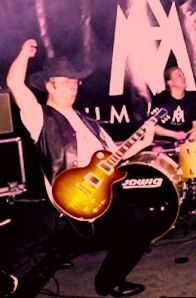 Started to play the guitar: In 1972 when I got my first guitar as a Christmas present.  My first gig was at the upper secondary school’s “penkkarit” in 1977. I joined my first bands in the 80’s.
The best performance: Well, hard to tell. Maybe that was the IBM’s Band Club gig at the Gloria in 2008 or a rock festival in Uppsala, Sweden, in 2009? In 2005 I played in a three different bands during one evening – that was special, too. Those may not be my best performances, but when you play for an enthusiastic audience, you’ll never forget it.
Would love to play: I prefer melodic heavy metal á là Deep Purple, Black Sabbath, Led Zeppelin, Uriah Heep, Rainbow and the bands from the 60’s such as Cream, Hendrix and Clapton. I also like Santana, Gary Moore, Thin Lizzy and Iron Maiden.
Wouldn’t play: No thanks to Finnish humppa and Finnish pop music. I will not play grandpa jazz or three chord songs anymore. I dislike rap music and grunting death metal as well.
Favorite songs: War Pigs, Burn, Highway Star, 21st Century Schizoid Man, White Room, Fire, Flight of the Rat, Into the Void, Fireball, Gypsy, Heartbreaker, Black Dog, Immigrant Song, Lemon Song, Badge, Emerald, Whiskey in the Jar, I Surrender, Still Got the Blues, Black Magic Woman/Gypsy Queen/Oye Como Va, Runaway (Bon Jovi), Smooth, Corazon Espinado, Long Train Running, Final Countdown, Somehow Somewhere Someway, Get On, Children of the Grave…
The best thing about Atrum Materia: Nice and skilled band fellows. We’ve got a fully motivated and a hard training team here. It feels good and now I’ve got a chance to play my favorite music.
Timo’s gear:

No incoming links found yet.